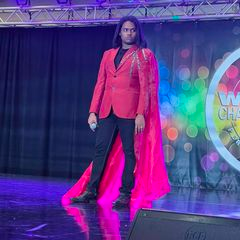 Being successful at the early stage in life can be dangerous but it’s worth the risk ,

Hi I am Kashmeran Rajoo Internationally acclaimed singer songwriter,poet , Culinary expert and Spokesperson.Hi I am Kashmeran Rajoo I was born on April 3 ,2003 in Malaysia, I am singer/songwriter , Culinary expert and poet .I started singing and performing at the age of 8,I left Malaysia to pursue my career Internationally in India with my families guidance,I am one few Asian artist who has an international music reputation and very few Indian singers who can sing ballad and Irama Melayu Songs ,I can sing in multiple languages such as Tamil, English, Hindi, malayalam,Chinese,Oriya,Badaga,Tulu,French,Kannadam, Indonesian,bahasa melayu.

I won in voice WizKids India ,

I auditioned for Sun singer and super Singer in India but couldn’t make it,But I still managed to perform in Small concerts and school events in a big scale, Growing up as chubby dark skinned boy with a Huge Artistic dream was very hard and depressing ,I was a Victim of physical,mental bullying and also sexual harassment.When I was in India I was strongly labeled as a failure by Musicians and stars saying “To be star you are suppose to fit in a mould of the industry ,you don’t belong in this music business”,That really broke me but didn’t stop me from becoming a star ,I wanted to prove that everyone has the rights to dream and become who ever they destined to be.I worked Quite hard to make things happen in India because Indian music is one of the biggest Music industry in the World,My music and style still manage to get critics from Grammy winner Tanvi shah and so many more Singers who made it to the top .After 6years I flew back to Malaysia at the age of 15 , I started to performing in school events,In a span of 3 years I became the highest performing student in school history total 58 performances,And first student to Own the tittle Smk singing sensation,Smk iKon seni Dan hiburan(Icon of Arts and Entertainment),that encouraged me to appear on a megahit show I see your voice Malaysia,After that show I participated in Voice Infiniteen RTM and won ,I was interviewed by icsyv team in tv1 , I have received tittles such as singing sensation , Nightingale ,I participated in Songwriting contest conducted by bengkel Pondok seni and Amir johari and After all the rejection I got to meet right people .And I won the contest,I wrote a song name ‘Jiwa Malaysia’ which was released on Hari Malaysia by Radio Rakita.I  am currently thinking about working on a single with Ewal Kristal ,He is the vocalist of kumpulan kristal from which has made Malaysia famous internationally, I was also also invited to perform virtually Infront of the Legendary International POP ICON Anggun for her 15 years fanpage celebration,She mentioned that ‘kashmeran you have a beautiful tone don’t stop channeling yourself’.Malaysian Idol first winner Jaclyn victor praised him for his vocal abilities and mentioned it as’Gods Gift’.His unique style of singing made him reach out to audience from France, United Kingdom,Indonesia, India,and more,After that strong international reputation i recently participated in One of the biggest Talent finding competitions in the world’Malaysia championship of performing arts also Known as Olympic of performing Arts with participants over 70countries and I am representating Malaysia in the world Arena.
After two weeks competing in World Championship,I bagged 2 Silver 🥈 Medals.

My Own Single JIWA MALAYSIA received highest scoring charts in 18 to 24 category and I received compliments from 2Grammy winner, Seven Grammy nominee producer Mr Jeffrey Weber .’He mentioned ‘Youre high fashion sense and vocal timbre is gonna pave a name for you in the World Music Scene!!kudos little Madonna’ .I was spellbound and confused actually because I thought he didn’t like my singing style but actually he proved my intentions were wrong.Everything was just like Finding pieces of the puzzle but all the pieces were actually in front of you, When those life -changing turning points come,you have to be ready and be able to seize the moment

When I look back ,I had to go through all that so that I can be who I am today.

I am Kash and I believe you can change your destiny.